The View From Matt’s Office. As the “slot” pilot in the Blue Angels, Matt spent quite a bit of time wedged between F/A 18 Hornets as close as 18 inches apart. Read on to see more pictures and learn a bit more about Lt. Col Matt Shortal.

Matt Talks About his Dream Job in this interview. We’ll be doing a full interview on the Bikeskills blog with Matt in the near future. We just wanted to let you know he’s part of the team at Bikeskills and join us in welcoming him aboard. 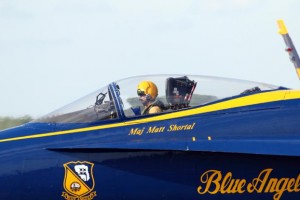 Pro Cyclists Get Their Names on Their Bikes… Members of the Blue Angels get their names on the jets they fly. We’re not sure if Matt or pro cyclists get to keep their gear… our guess is that Matt had to give his ride back to the Navy. 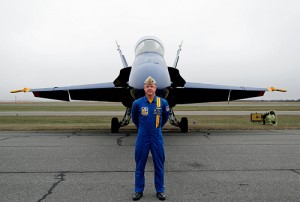 Another Shot of Matt with His Hoopty in the Background. There aren’t a lot of people that have shots like this. And, as there’s only one Marine at a time in the Blue Angels, they are the rarest of the rare. 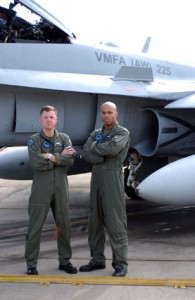 One of the Roads to the Blue Angels is the USN’s TOPGUN School. While Matt (left)  didn’t have to have “1V1s” against Bikeskills advisor, Cmdr Craig Sorensen USN, he did earn a slot at the Navy’s elite fighter pilot training center and the following year was named the Marine Corps Aviator of the Year.  Read more about Matt’s TOPGUN experience at this link.

Want to Check Matt out in Action with the Blues?  Here’s a YouTube Video with Matt Being Introduced at the Beginning Flight Maneuvers: